Tributes are being paid today to Roy Dommett, former UK Chief Missile Scientist and morris dancer, who sadly died yesterday. I never met Roy and only heard his name mentioned once or twice, but reading about him he sounds like a fascinating guy and is a lesson to all of us that morris can sit alongside any occupation.

Roy wasn’t just any morris dancer, though; he was an instrumental figure in the morris revival in the 1950s and ’60s, a touring lecturer and author on the history and techniques of morris. He founded Farnborough Morris in 1954 and worked to help establish a new generation of women’s morris teams in the 1970s.

You can read about Roy’s life and career on his Wikipedia page, so I won’t repeat it all here. He was one of the most senior figures in the development of Britain’s nuclear and satellite rocket systems, working on Black Knight, Blue Streak and Black Arrow. When Britain ceased developing its own missiles he worked on adapting the bought-in American Polaris and Trident systems for British use.

This is all a far cry from the world of morris dancing. Of course there isn’t a typical career for people involved in the morris world – we’re drawn from all walks of life. But if pushed people would maybe say school teacher or perhaps something in healthcare. They probably would not say nuclear rocket scientist, which is a shame, really.

I imagine it must have been hard sometimes to reconcile his work with the circles he socialised with in the morris world. I love the story in the below video; Roy turns up to a dance out, only to find it is part of a CND demo. 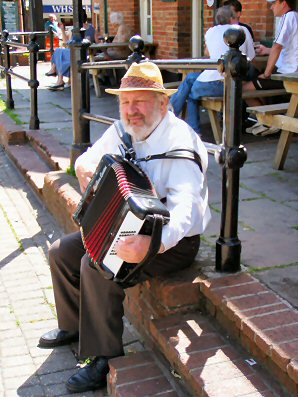 Send to everyone you know: